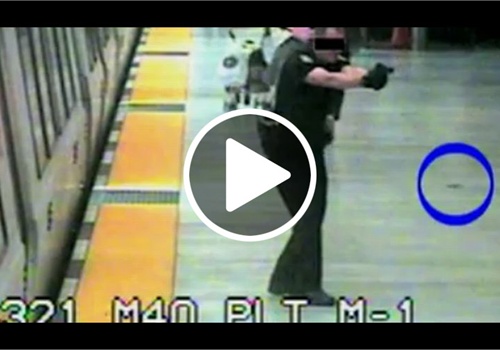 Since its inception in 1972, BART (Bay Area Rapid Transit) Police have been involved in six shootings. Three of them occurred during the past three years, including latest on July 3 at the BART Civic Center station in San Francisco.

Officers fatally shot a suspect in self-defense when he attacked them with two knives. The reaction among anti-police factions was immediate, intense, and undoubtedly intensified by a fresh memory of the controversial, deadly shooting of an unarmed passenger by BART Officer Johannes Mehserle on Jan. 1, 2009.

The shooting sparked widespread outrage, protests, and demonstrations. It led to violent riots in Oakland. Mehserle was arrested, charged, convicted and sentenced for involuntary manslaughter.

The Bay Area is certainly no stranger to demonstrations, so it's no surprise that the July 3 BART Police shooting sparked a new round of protests in the city, including the July 11 protest at the Civic Center BART station at the peak of a busy afternoon commute.

Protesters invaded the BART station, clambering over a BART train filled with passengers. The resultant chaos, which was filmed, showed protesters physically preventing the BART train from moving. At least one protester attempted to climb atop the train. Video captured a very chaotic scene.

(VIDEO) Watch an excerpt of the July 11 protests:

The July 3 BART shooting controversy continued to pick up steam, as critics questioned, doubted, and eventually condemned the police "version." For the second time in 2-½ years, BART Police found themselves embroiled in yet another controversial shooting. This was yet another blow to BART Police—a department working very hard to rebuild its image.

The SFPD/BART Police investigation into the July 3 shooting continued. On July 21, BART released video of the shooting. The video shows two BART officers getting off a BART train at the Civic Center station. Within 25 seconds, they found themselves in a life-or-death confrontation.

The video surveillance footage of the incident has been well broadcast. It begins by showing the initial officer putting his gloves on, perhaps anticipating a potential confrontation. Seconds later, you see a knife thrown at the officer by the suspect strike the side of the BART train, then slide across the platform floor.

Almost simultaneously, you see the officer draw and fire his service weapon at the suspect, who is off camera. BART officers say they fired in self-defense when the suspect attacked them with a second knife. The incident was over in 25 seconds.

The blockbuster BART video was released on July 21. The next logical question is whether this latest evidence supporting the BART officer's account will be enough to "satisfy" public opinion.

If we are truly serious about reducing active shooter deaths, we must stop the political posturing and the self-serving, useless rhetoric and commit ourselves to the many viable solutions that are out there. We owe it to our children to find a way.

With the exception of the military-related attacks at Fort Hood and the Washington Navy Yard, terrorists and criminals are more likely to assault a facility where resistance is minimal—a "soft" target.

What LE Can Learn From the Kenya Mall Attack

These types of attacks illustrate the pattern that terrorists are committed to inflicting death and destruction anywhere to generate headlines and rally other lunatics to their cause. They are prepared to do anything to win.

Incorporate Fitness Into Your SWAT Training

Part of the SWAT lifestyle is fitness; make no mistake about it. Teams should not have the "look" of a model but actually just good sound fit individuals to hold things together in a time of crisis.

How To Start a Tactical Team

There are plenty of behind-the-scenes preparations needed to form a tactical team. It's not just gathering a group, getting fancy tactical dress, and heading out for some shooting.

A trio of ATF commanders have offered new details about the failed Waco raid and outlined changes within the agency since 1993, as the agency remembers its four fallen agents on the 20th anniversary.

Inside the FBI's Alabama Bunker Raid

The carefully orchestrated raid that ended a hostage standoff at a survivalist's bunker in Midland City, Ala., was a SWAT tactic of last resort for the FBI's Hostage Rescue Team (HRT).

Every Officer Should Be Trained In SWAT Basics

Shouldn't every good basic cop have the ability to quickly stack, flow into a room, hold a position if a SWAT team leader stated, "you two post this hallway," and back-clear or secondary search several rooms?