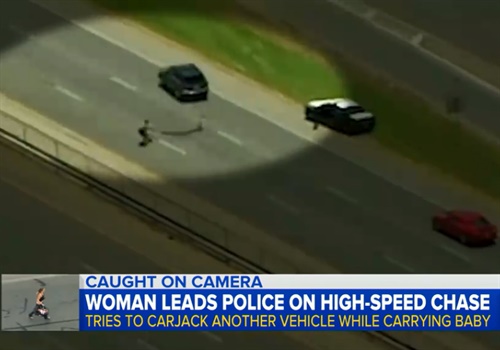 A woman who allegedly led police in Texas on a high-speed pursuit crashed into another vehicle and—carrying a baby in a car safety seat—allegedly attempted to carjack another vehicle.

Video of the entire incident was captured by a pursuing police helicopter.

The woman—identified by police as 29-year-old Catilyn Rodriguez—reportedly had outstanding warrants and fled after a DPS trooper conducted a traffic stop.

The child was released to Child Protective Services, according to ABC News.

Voters in Loudon County (VA) may soon be faced with a referendum that could lead elected officials to begin the formal process of creating a county-wide police agency.

A crowd of hundreds police supporters marched through neighborhood streets in the Staten Island borough of New York City on Saturday to show their support for the NYPD in response to anti-police protests taking place across the country.