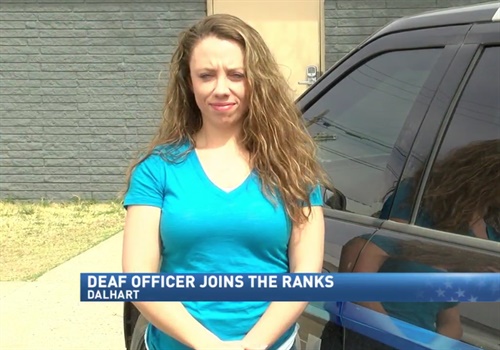 The newest member of the Dalhart (TX) Police Department is helping the department make history. When Chief David Conner hired 25-year-old Erica Trevino, she became the first female deaf commissioned police officer hired to work at the department and is believed to be the first in the state of Texas.

"It's a passion of mine," says Trevino. "It's not something I just want, it's something God has called me to do. That's what I believe. This truly is a career and I can't tell you how much I look up to the people and I respect how much work the officers put into becoming a police officer."

Trevino tells ABC 7 News she is fluent in four sign languages and can communicate in ways most officers can't when someone is in distress or needs help.

"With Officer Trevino being here that's going to be tremendous asset for those who are hard of hearing or deaf," says Chief Conner. "She will be able to communicate and assist us in that realm as well."