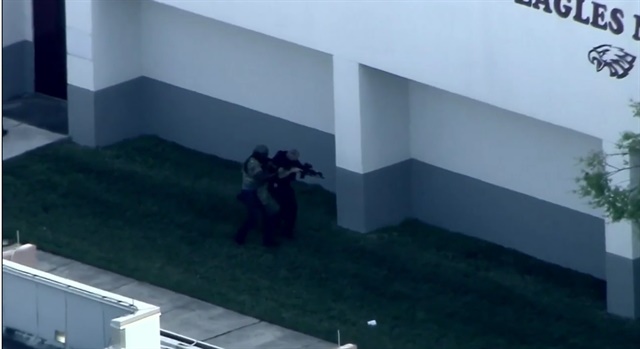 VIDEO: Officers Say They Went Past Deputies into Parkland School During Shooting

He asked for the shooter's location, and was told they didn't know it, but he could see a body next to the freshman building at Stoneman Douglas and bullet marks in its third-floor windows, the Associated Press reports.

He said in reports released Monday that he and three other Coral Springs officers immediately went to the building, checked the body and then entered, where they immediately found a victim standing against a wall before falling to the floor.

The four pages written by three officers detail what they found when they arrived at the school, where another 17 people were wounded. They corroborate earlier reports that the first deputies at the scene failed to enter the building to confront the gunman and assist the wounded.

Officer Tim Burton, the first on-duty Coral Springs officer to arrive, grabbed his rifle and was directed toward the freshman building, where he found Deputy Scot Peterson, the school's resource officer, taking cover behind a concrete column.

The officer who was struck immediately turned around and fired his Taser, but it’s unclear if it struck Jimenez.

Health care workers, police officers, firefighters, EMT’s and other first responders will be moved to the front of any line to enter a Costco warehouse, the company said on its website.

DC Metro Officer Dies of Medical Emergency While On Duty

An officer with the Washington DC Metro Police Department reportedly died Monday after suffering a medical emergency while on duty.

An officer with the Vancouver Police Department reportedly exchanged gunfire with a motorist at a traffic stop early Tuesday morning.