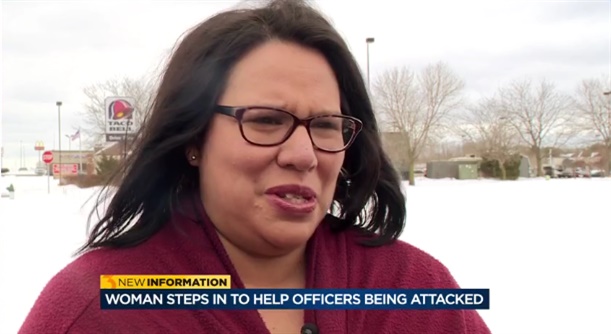 A Portage, WI, police officer was kicked unconscious and another officer was injured during an arrest Sunday night, officials said.

The Portage Police Department said the two officers were trying to arrest 21-year-old Jacob R. Hellenbrand, of Waunakee, on a probation and parole violation Sunday.

According to the report, 21-year-old Olivia J. Boomsma, of Rio, instigated the attack by punching one of the Portage officers multiple times while he was attempting to place Hellenbrand into handcuffs. The officers suffered swelling and bruising to his left eye.

During the struggle, a police sergeant came to the officer's aid and attempted to restrain Boomsma on the ground. While Hellenbrand was being stabilized against the wall of a building, he kicked the sergeant on the right side of his face and head, causing the sergeant to lose consciousness for 2 minutes, police say.

Vanessa Guerra, an off-duty nurse from Divine Savior Hospital, saw the struggle and that the sergeant was unconscious.

The nurse says she was checking on the sergeant when she realized Boomsma was beginning to fight with the officer again, and that Boomsma was yelling about having a knife in her pocket. The nurse was concerned that Boomsma was going to stab the officer or the unconscious sergeant, so she body slammed her and held her until an officer could handcuff her, Channel 3000 reports.

New Jersey Officers Give Away 300 Pizzas to Needy Families

Police in Toms River, NJ, are paying for hundreds of pizzas to help local residents and businesses impacted by the coronavirus shutdown.

Starbucks has announced that all police officers, paramedics, doctors, firefighters, hospital workers, nurses, and medical researchers will be eligible to receive a free tall coffee hot or iced from participating Starbucks nationwide.

The department said that officers from the agency's southern division decided to help a man, identified as "Mr. Teo," a 95-year-old widower.