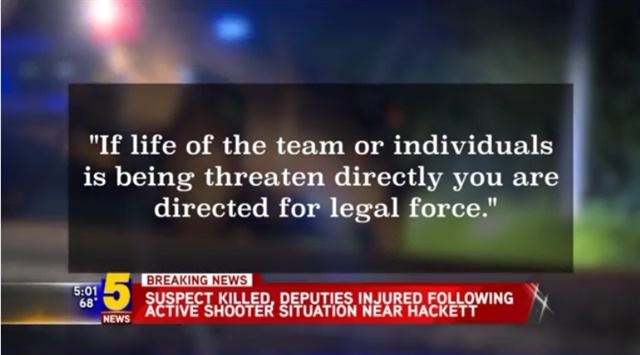 The deputies, all members of the SWAT team, were taken to Mercy Hospital in Fort Smith and were treated for non life-threatening injuries. They were released from the hospital Tuesday morning (May 8). Captain Phillip Pevehouse with the Sebastian County Sheriff's Office told 5 News the deputies were injured from shotgun pellets from the suspect's gun.

The situation began at about 10:40 p.m. Monday night (May 7). An off-duty Hackett police officer heard a disturbance in his neighborhood off West Arkansas 10 between Hackett and Greenwood and went to check on the family. The sheriff said the suspect left the home on Sunny Hill Place with a shotgun and fired at the officer, who returned fire. The officer left and called 911.

"We had our SWAT team surround the suspect's location, set up a perimeter," said Sebastian County Sheriff Bill Hollenbeck. "He fired several rounds at our S.W.A.T.officers. At one point, while he was attempting to load a vehicle up with more firearms, he also attempted to get away."

The suspect was killed when deputies returned fire, the sheriff said.

The viewing and funeral for slain Philadelphia Police Cpl. James O’Connor have been postponed indefinitely amid the coronavirus outbreak. O’Connor was shot and killed last Friday morning, while serving an arrest warrant.

POLICE gets to see the Busch PROtective AMP-1 TP Helmet by Armor Express up close at SHOT and gets a demonstration of its adjustability.

The Goose Creek (SC) Police Department recently honored one of its long-serving K-9s with a retirement ceremony that included serving up a tray of treats for the dog that served the community for nearly seven years.

"Officer Robey deployed his K-9 partner Stryker to conduct a free air sniff of the tractor trailer and K-9 Stryker alerted to the presence of narcotics," the Lewisville PD reports.

K-9 Chief was shot in the eye during a police chase with 22-year-old Jose Rivera around 11 p.m. Friday, Chief Kevin Fuhr said Monday, and due to the severity of his injuries the eye will need to be surgically removed.

Impact protection company D3O has announced that its products are now available through Schedule 84 contract by the General Services Administration (GSA), via D3O partner TSSi.

Last week the crew at RawTin Garage—West Valley City, UT, customizers and restorers of motorcycles and cars—received an unusual request. The Herriman (UT) Police Department wanted a custom paint job on the casket for a K-9 killed on duty.