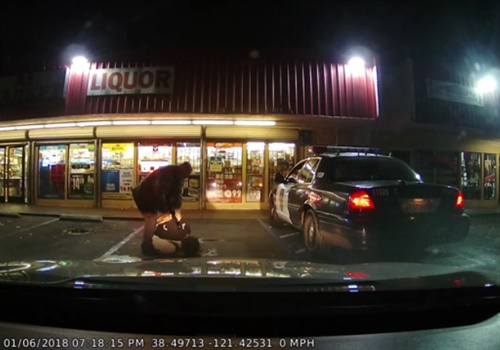 Zachary Samaha, 22, allegedly stole a Sacramento (CA) Police Department squad car Saturday evening. Chris Marzan, a citizen who apprehended him, said the barefoot Samaha drove the car to A-1 Market Liquor off of Florin Road and was heading out of the store with a 40-ounce bottle of beer he had already opened.

Marzan ordered Samaha to the ground and summoned officers, who soon arrived to take the young man to jail. Marzan said in an interview with the Sacramento Bee that he's "kind of a magnet" for mayhem and has performed four or five other citizen's arrests for domestic violence, driving under the influence, and credit card theft.

Samaha allegedly took the vehicle after it was left unattended by officers who were responding to a call in the area of Stockton Boulevard and Riza Avenue near Florin around 7:17 p.m. A short time later, motorist Marzan spotted the patrol car swerving as it drove south down Stockton Boulevard with its lights off.

He flashed his lights at the car, which then pulled a u-turn and fishtailed in the street before hitting a telephone pole next to a car dealership parking lot. Marzan described the incident to the Public Safety News Network, which published a video to Facebook.

Samaha was booked for vehicle theft and driving under the influence.