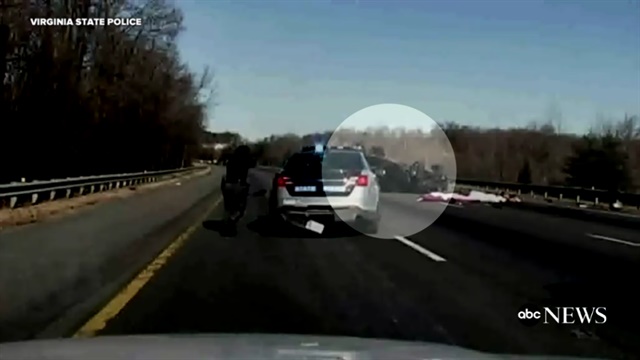 Dashcam video from the Virginia State Police shows a murder suspect flip his car while trying to evade officers on Interstate 95 Dec. 28.

According to Virginia State Police, they were looking for a man driving an SUV who was wanted in connection to a murder. Police said the man allegedly shot and killed a woman in Stafford County, Virginia, before fleeing the scene in the SUV.

A state trooper and a local deputy noticed the SUV on the interstate and tried to pull the man over, ABC affiliate WJLA said. However, when the man pulled over, authorities say he got out of the SUV and shot at them. He then fled, and officers pursued.

The suspect was seriously injured in the crash and flown to a nearby hospital for treatment. It's unclear what condition the man is in now or if he has been charged, ABC News reports.