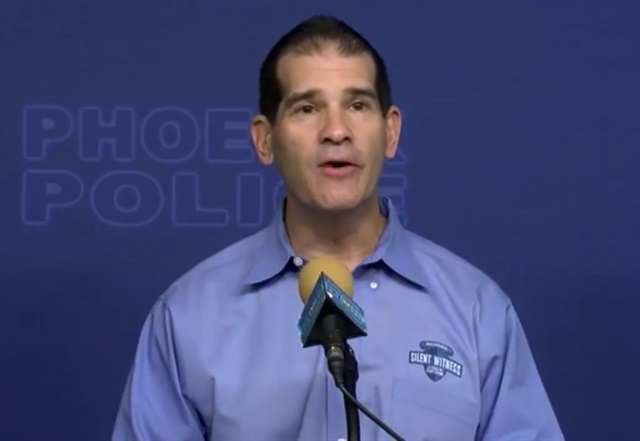 Silent Witness, an Arizona crime tips program, announced Wednesday that it is offering a $500 reward for information leading to the arrest of a man wanted in connection with an October hit-and-run that seriously injured a Phoenix officer.

Police say Jose Pedro Moreno Leyva, 39, hit the motorcycle officer on October 21. According to police, he was driving a pickup truck and failed to yield, turning left in front of the officer. With the impact, the officer was thrown from his motorcycle. He was hospitalized by the incident.

Moreno Leyva is the first fugitive featured in Silent Witness' new Catch 22 program, which targets 22 of the area's most wanted fugitives and offers expedited rewards for people who anonymously submit tips that lead to their arrests.

Phoenix Police Sgt. Jamie Rothschild, who oversees the Silent Witness program, says the list of Catch 22 fugitives was compiled by local law enforcement agencies. "Essentially we queried several law enforcement agencies to ask them what fugitives they were willing to feature particularly ones that the public could help with. We asked them to consider using cases where they could really use a break from the public," he explains.

Rothschild says that through team work between concerned citizen witnesses and law enforcement—including the Phoenix Police Department, the Maricopa County Sheriff's Office, and U.S. Marshals Service—the Silent Witness program led to the arrest of 141 felons in 2017.

The program protects the tipsters' anonymity, letting them claim their rewards at local banks through a code system that prevents even law enforcement from knowing their identities. During a press conference Wednesday, the organization said that tipsters are more concerned about the safety of the community than the rewards and half never claim the rewards.

Silent Witness is a non-profit organization. All rewards are paid through fundraising efforts. Law enforcement officers work the tip lines 24 hours per day, seven days a week, and even on holidays.