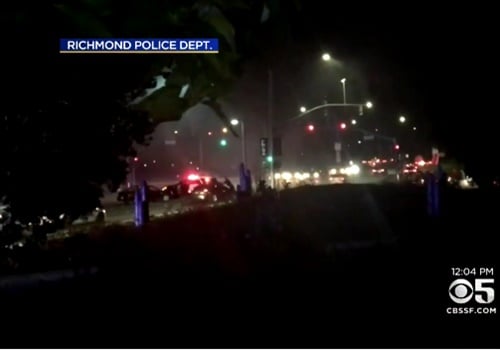 VIDEO: CA Officer Struck by Car While Trying to Break Up Sideshow

Two teens have been arrested and charged with attempted murder after allegedly running over a Richmond, CA, police officer as he attempted to break up an illegal sideshow early Sunday morning, authorities said.

Richmond Police Chief Allwyn Brown told reporters that Juan Vargas, 18 of Patterson, who was the driver, and his 18-year-old girlfriend — Genesis Diaz-Castaneda — were in custody at the Contra Costa County Jail on charges of attempted murder, conspiracy, and making a false police report. Bail has been set at $240,000.

The officer injured, Brown said, has been released from the hospital. The eight-year veteran suffered a variety of injuries including broken bones, cuts to his head, and road rash, reports KPIX-TV.

While officers were trying to stop a few cars for vehicle code violations, one of the cars sped toward an officer who was on foot.

The car reportedly sped off, leaving the injured officer in the middle of the road.

A man identified as Wallace can be seen on citizen video chasing the officers around the car. The officers give the man orders to "drop the knife." He appears to advance on them and they open fire.

A deputy with the Calvert County Sheriff’s Office was badly injured when her patrol vehicle collided head-on with a minivan early Tuesday morning.

Officers with the Brookhaven (IL) Police Department will now have the assistance of two mental health professionals when responding to calls involving persons in mental distress.

The American Civil Liberties Union of Hawaii has filed a lawsuit against the city of Honolulu and the Police Department alleging that an officer violated agency policy when he placed under arrest a teen who had gotten into an altercation with his son.

An officer with the Alexandria (VA) Police Department is listed in fair and stable condition after exchanging gunfire with an assailant early Monday morning.

Mississippi Officer Creates Program for Kids to Have Access to Books

An officer with the Shannon (LA) Police Department is being lauded for helping set up "little libraries" for local kids to get access to books even during the COVID-19 pandemic.

The chief of the Ocala (FL) Police Department was killed in a small plane crash in a field in southwest Marion County on Sunday morning.