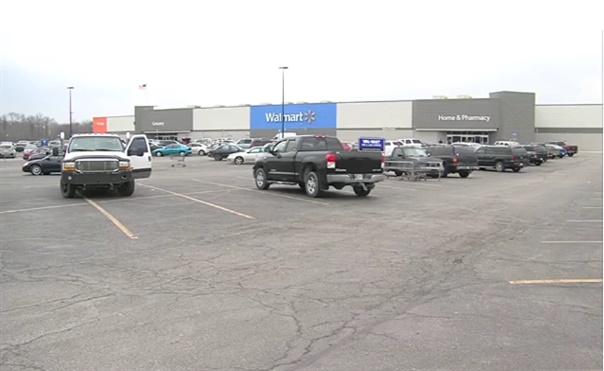 VIDEO: Indiana Murder Suspect Went to Walmart Then Came Back During SWAT Standoff

A murder suspect broke through a police perimeter during a SWAT standoff last week in Terre Haute, IN, then he went to Walmart and came back to a house for a fatal confrontation with police.

Terre Haute Police had the home of Mikey Reynolds surrounded. They say Reynolds murdered his ex-girlfriend and shot another man.

During the standoff, police believe Reynolds escaped from his home through a basement window next to a privacy fence and out of police view. Then he went to another house and to the store, WTHI reports.

Reynolds returned to the second house, where he was killed after allegedly threatening state police SWAT shortly after noon on Tuesday March 6.

After several hours, the suspect released his 6-year-old daughter. Police negotiators continued trying to coax him to give himself up. But when that didn’t happen, after about four hours, an internal Aurora police report says “Decision made to vacate.”

Officers with the Pittsburgh (PA) Police Department are now mourning the death of a K-9 who had served that community for more than a decade.

Officers with the Poquoson (VA) Police Department are now mourning the passing of K-9 Rena, who died on Sunday afternoon. The department said Rena's cause of death was "unexpected, but due to natural circumstances."

Pine Bluff Police Chief Kelvin Sergeant said the shootout involved three officers and at least one suspect. The three officers were conducting an ongoing investigation as part of the violent crime unit.

The Chicago Police Department has announced the addition of more than 200 officers to a special unit assigned to addressing violent crime in the Windy City.

A K-9 with the Vacaville (CA) Police Department is now credited with the apprehension of two burglary suspects who had attempted to hide from police after leading them on a vehicle pursuit.