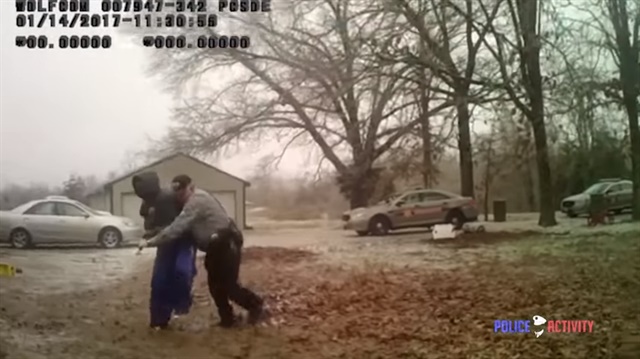 Marcus Lavender was determined to commit suicide by cop by his own admission, according to the body camera footage provided to the Daily Guide by the Pulaski County Sheriff’s Department.

Brickner told the Daily Guide that he and Bays went to Lavender’s residence for a well-being check call. After arriving, they were warned by dispatch that Lavender had made threatening remarks about trying to shoot any officers that arrived on scene.

“The front door was opening with the muzzle of a weapon behind it. I grabbed a hold of the muzzle pushing it away and wrapped around the guy and we started to wrestle with the gun. It went off. I had yelled for my partner and he’d come running,” Brickner said.

Bays ran to Brickner's aid and came upon Brickner struggling with Lavender in the front yard over a rifle.

Bays drew his weapon and ordered Lavender to drop his weapon, but did not shoot because Brickner and Lavender were struggling for the rifle and there was a risk that Bays could hit Brickner.

Bays Tasered Lavender and helped Brickner secure him, while Lavender begged the officers to shoot him, telling them, “I want to die.”