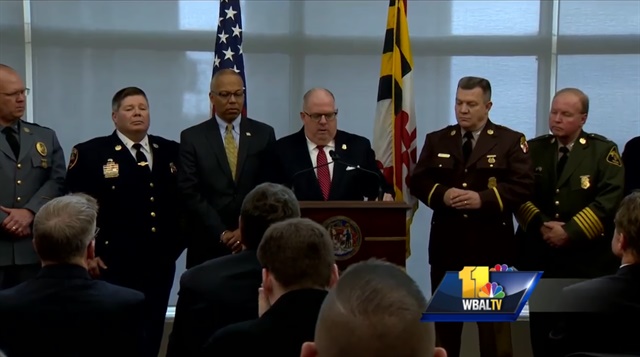 He reiterated his criticism that Mayor Catherine Pugh’s anti-violence plan focuses too much on providing services to young people to prevent crime in the future instead of fighting crime today, the Baltimore Sun reports.

Hogan’s plan includes beefed-up patrols in the city by state police agencies, including the state police and transportation agencies, as well as increased monitoring of people on parole and probation, more outside assistance for serving warrants, the creation of a cross-jurisdictional crime-fighting council and legislation that calls for longer sentences for violent criminals.

* A new Governor’s Council on Gangs and Violent Criminal Networks made up of prosecutors and police to fight gang crime. The council will be chaired by Carroll County State’s Attorney Brian DeLeonardo.

* A new intelligence network to help police and prosecutors better share data across the state and with federal law enforcement.

* More than 200 parole and probation officers to track down offenders.

* An “aggressive sweep” across the city with 80 U.S. marshals and federal officers on high-priority warrants.

* New legislation to increase minimum sentences for repeat violent offenders. New “truth-in-sentencing” legislation that would require second-time violent criminals to serve their full sentence and make them ineligible for parole.