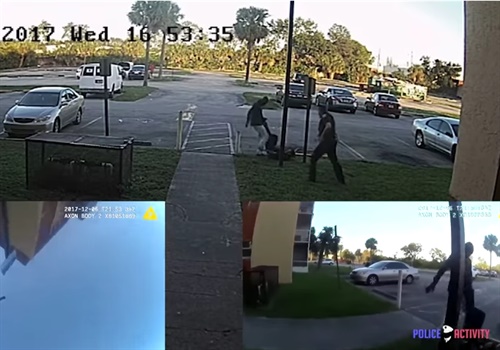 Broward County, FL, Sheriff Scott Israel said Friday he wanted to share video of an officer-involved shooting last Wednesday to be transparent and to correct what he called "misinformation" about the fatal shooting of a man who attacked deputies.

On Friday afternoon, the sheriff's office took the unusual step of releasing video from surveillance cameras, two deputies' body cameras, and 911 recordings from the open investigation to defend the actions of Deputies Sean Youngward, 48, and Steven Briggs, 49, when they met Jean Pedro Pierre, 42, Wednesday at the Sunset Hills Condominium in Lauderdale Lakes, FL.

The decision was made after a citizen's video of the incident appeared on social media, reports the Orlando Sun-Sentinel.

"There is information on social media that is just untrue and are actual lies," Israel said. He said Pierre was shot three times, not seven, and he did not die at the complex, as was rumored. "He was given CPR, our firefighters transported him to Broward Health Medical Center and he died [there] hours later," Israel said.

Youngward was the first deputy to respond at 4:50 p.m. to a report of a disturbance at the complex. "It was a violent encounter," Israel said. When Youngward's Taser did not stop Pierre, the deputy falls on his back onto the ground, and Pierre kicks him multiple times. He also grabs the deputy's foot.

The cellphone video also recorded the voices of onlookers who were standing on an upper floor of the four-story complex. Youngward had called in a Code 3, signaling he was in great danger, and as approaching sirens grew louder, the bystanders urged Pierre to let go of the deputy.

Then Briggs arrived as backup. "Mr. Pierre chose the path of non-compliance," said Israel. Then, the sheriff said, Pierre "charged at Deputy Briggs. Deputy Briggs had his firearm. He shot three times."