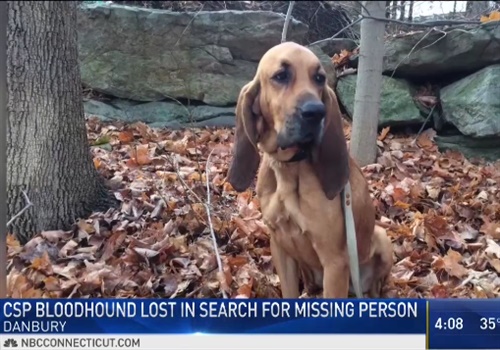 A Connecticut state police bloodhound named Texas joined the search for a man who was reported missing in Danbury. The man was found but now police and firefighters are looking for the search dog.

The search for Texas continued as of Thursday evening, reports WVIT.

Danbury, CT, police reached out to state police around 6 p.m. Wednesday for help to find a man who was missing in the area of Wooster Mountain. The State Police K-9 Search and Rescue Teams, state police bloodhound teams, and a state police helicopter responded to help.

K-9 Zeus found the man, who was walked out of the woods.

But during the search, a state police handler lost his footing in steep terrain and lost "possession" of K-9 Texas' 15-foot leash as the dog tugged and ran ahead up a hill.

"You tell a bloodhound to stop, the bloodhound says, 'I'm on a scent right now so you're going to have to catch up with me," Trooper Kelly Grant said.