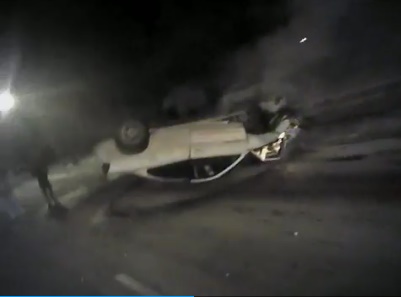 It could have been a horrible new year for the families of two Milwaukee teenagers if not for two young Milwaukee police officers known as "The Nick Squad."

Fourth District Officers Nicholas Schlei and Nicholas Reid, both 23, were on patrol shortly after 7:30 p.m. Tuesday when a 1999 Pontiac Grand Am crashed into a utility pole.

Without gloves in single-digit temperatures, the two officers made the split-second decision to try to pull the two 16-year-old boys from the burning car, which was on its roof.

"To help save someone, there's no better feeling," Reid told the Journal-Sentinel.

"I think that officers just like us, and at every Milwaukee police district station, even across the country, they would do the same thing," he said.