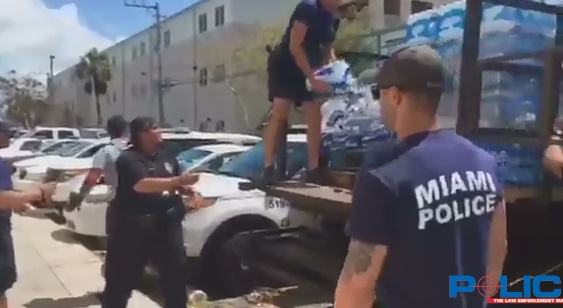 Sunday when Hurricane Irma rolled past the lower Keys, it wreaked serious damage on Key West, leaving the first responders with massive civil order and disaster cleanup responsibilities in a city with no running water, no fuel, and no cellular communications.

Miami Police Lt. Javier Ortiz says he learned Monday that officers and firefighters in Key West were down to their last 10 cases of bottled water and needed help. So he and his disaster assessment team of six City of Miami police officers volunteered to render aid.

Ortiz says Chief Rodolfo Llanes graciously allowed the officers to lend their manpower to assisting the Key West officers, and the Miami Fraternal Order of Police bought supplies. "We delivered 4,000 bottles of water Tuesday, and we will take down another 6,000 on Thursday," Ortiz says.

In addition to the water deliveries, the Miami officers brought food and non-perishable items to their fellow responders in the lower Keys. They also lent the short-handed Key West officers a hand in keeping the peace. Ortiz says his officers responded to a civil disturbance and helped provide security as National Guard personnel worked at a local shopping mall to dispense MREs and bottled water to storm victims. They also put tarps on damaged roofs and cut up fallen trees.

Ortiz says his officers and some friends plan to cook for Key West first responders on Thursday. "We want to make sure they get a hot meal," he says. While the Key West officers are eating, the Miami officers will take over their duties, if needed, Ortiz adds.

As members of the disaster assessment team, Ortiz and his officers have plenty of work to do in Miami. In between their trips to the lower Keys, they are responding to the homes of fellow Miami officers whose homes have storm damage, including shattered roofs, downed trees, and impassable driveways. They also have damaged homes themselves.

"We have not had the chance to do our own homes," Ortiz says. "But we are not the priority. The officers in critical need in Monroe County (the Keys) are the priority. That's why we are now providing services for them courtesy of our chief of police."--David Griffith