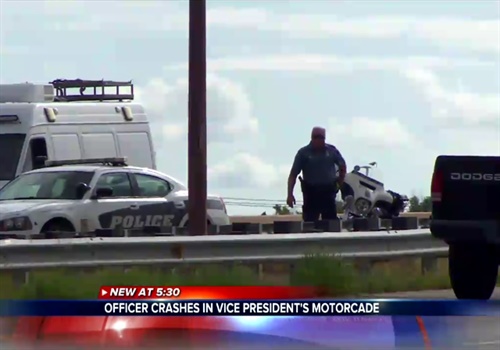 An officer was seriously injured in a motorcycle crash while in Vice President Mike Pence's motorcade Saturday. He has undergone a successful surgery but remains in the ICU, reports KKTV.

Officer Andrew Holland, an eight-year veteran of the Colorado Springs (CO) Police Department, was badly hurt in the crash, which happened as the motorcade escorted the vice president to the airport Saturday morning. CSPD tweeted Sunday night that he remained in the ICU for observation. His condition had previously been posted as serious but stable.

The crash happened on Highway 24 at the Martin Luther King Jr. Bypass near Circle Drive at about 7:45 a.m. Holland reportedly lost control of his motorcycle and went down. No one else was involved.

The motorcade continued driving Pence to the airport after the crash occurred because law enforcement wanted to ensure the vice president was safe while he was in Colorado Springs, police said. The vice president flew out of the city without incident.

Pence tweeted he had called the officer's wife to check on him. "Spoke to wife of injured Colorado Springs motorcycle officer," Pence tweeted. "So relieved his injuries not life-threatening. Will keep him in our prayers."