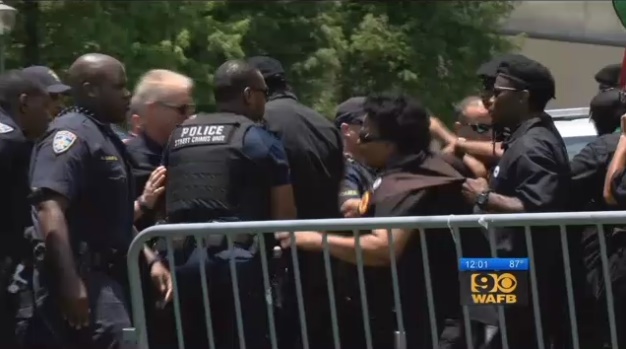 Seven people were arrested and a police officer was injured outside Baton Rouge PD headquarters during a small protest held to mark the one-year anniversary of the death of Alton Sterling, reports WAFB.

On July 5 around 1 p.m. while protesting at the Baton Rouge Police Department Headquarters, authorities say the seven ignored several "loud verbal commands" to "disperse and vacate" from the headquarters.

According to the probable cause report, all seven are members of the New Black Panther Party. Records from the East Baton Rouge Parish Prison show that all have been released.

Police say the seven members of the political group refused to leave and "attempted to storm the police barricade," which caused officers to attempt to take them into custody for the disturbance.

While attempting to arrest the group, police say Donald Williams of Richmond, TX, hit an officer on the arm and chest with a "taser probe" which they say "caused muscle dysfunction" in the officer.

Police also say Adam Fraser of Atlanta, GA, lunged at an officer with his fist clenched and the officer had to physically fight him until he was arrested. Upon arrest, police say Fraser continued to threaten officers and say he would sue them and have them fired.