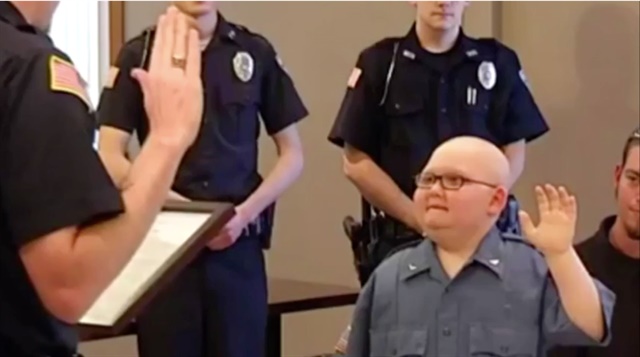 An 8-year-old leukemia victim who became an honorary Winona (KY) police officer passed away last Wednesday and was given an end-of-watch radio salute by the department.

Draven Pritchet’s honorary brothers and sisters in blue at the Winona Police Department paid tribute to him in the same way that they honor other fallen officers, KY3.com reports.

The latest Elite GEN V female concealable armor from Point Blank features a new ventilation system integrated into the carrier and named Eurus, the Greek name for the Southeast wind.

The newly designed Black Eagle Athletic 2.1 T Low features a super lightweight microfiber design, which is extremely breathable so that feet will stay comfortable indoors and out, even in hotter temperatures.

Using 3D metric data collected from thousands of women across the nation, Flying Cross has achieved a fit solution that maintains the authoritative uniformed-look expected.

The Blackinton Breast Cancer Awareness line was developed to raise money for and bring awareness to the fight against cancer.

The straight-leg design of the Shella Pant is clean and simple and 5.11 kept the pockets minimal, so you have a balance between looks and function that are conducive to a variety of activities.

The message: “ACAB! The Barrel is Rotten” was posted days ago on a sign in front of the Our Place Inn, and later shared on its Facebook page.

Sgt. Charles Warren has spent nearly 150 days in the hospital, during which time he was placed on a ventilator and coded several times, according to the sheriff.

Nashville Officer Shot After Being Set Up by 911 Caller

Metro police spokesperson, Don Aaron said officers had responded to the home after a man called 911 to report his brother had shot his mother and gunshots were being fired inside the residence.

n a statement, the bureau said the person had been involved in a “security incident” outside the CIA before he “emerged from his vehicle with a weapon.”