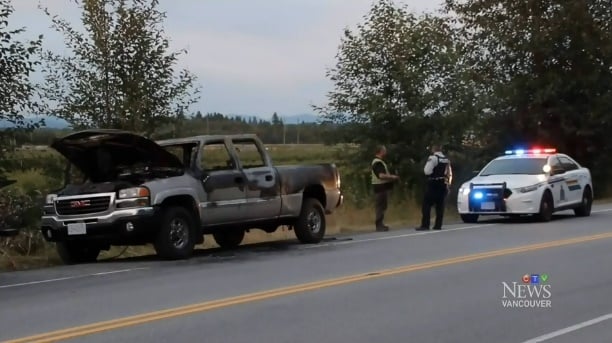 A man facing several charges following a bizarre series of events in Surrey, Canada, is alleged to have bitten a police dog during his arrest, reports CTV News.

Police were initially alerted to a pickup truck on fire around 6:30 p.m. Sunday. Witnesses said they saw a man pushing a wheelbarrow away from the burning vehicle.

The man was gone when officers arrived at the scene of the still-burning truck, but they recognized the vehicle as one that was stolen from the Maple Ridge area last week, and that had eluded police earlier in the day. Police had been looking for the pickup, which they say may be connected to a series of break-and-enter cases where firearms had been stolen.

With the help of a police dog, Mounties scoured the area where the man was last seen and began to track him northbound on 176th.

As officers followed the man's trail, residents made calls to the RCMP to report a man – matching the description of their suspect – running through their backyards, and attempting to take their vehicles and force his way into homes.

One resident said the suspect kicked a door down, then hid in a downstairs rental unit for another 10 minutes. When he tried to escape he was taken into custody after a scuffle with both a police dog and officers.

"He actually bit the police dog (on its snout)," Cpl. Scotty Schumann said, adding that police dogs are trained to become even more aggressive when a suspect fights back.

RCMP say the suspect is a 37-year-old man from Surrey, and was previously known to police. Schumann said the suspect will be facing "a number of serious charges."