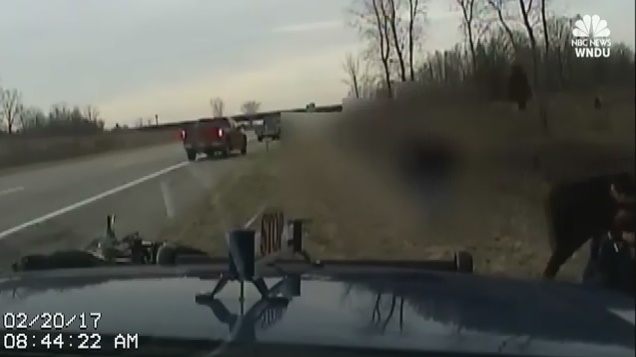 VIDEO: Civilians Aid Michigan Trooper Under Attack on Side of the Road

Michigan State Police have released in-car video of a trooper being attacked during a traffic stop in Berrien County. Civilians stopped to help the officer, perhaps preventing a gun grab attack.

The video — obtained by WNDU, the NBC affiliate in South Bend, Indiana — shows Trooper Garry Guild tried to pull over a speeding motorcycle on Feb. 20, 2017.

The alleged driver, 21-year-old Michael Scott Barber of Gobles, stopped but then took off, reentering the highway.

A few minutes later, Barber can be seen losing control of the stolen motorcycle on a patch of land near an exit ramp and crashing. Then the driver gets up and charges Guild, ignoring the troopers commands to get on the ground, WOOD TV reports.

As the trooper wrestles the suspect, a vehicle stops and the suspect’s 19-year-old brother gets out and puts the officer in a chokehold. The suspect can be seen trying to grab Guild’s weapon.