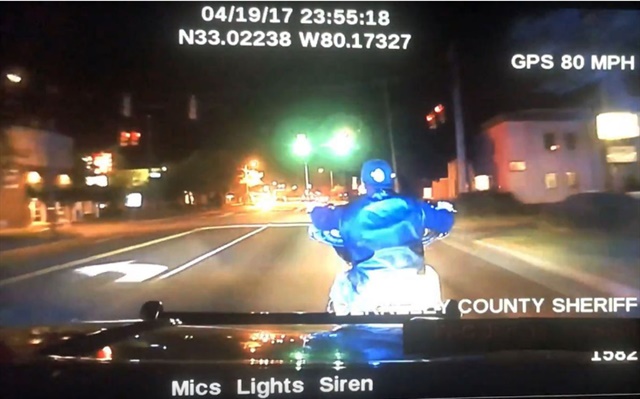 The Berkeley County (SC) Sheriff's Office has released video of a high-speed pursuit that ended with the death of the pursued motorcyclist. The Wednesday night pursuit lasted more than five minutes and the involved deputy has been placed on leave.

The video footage appears to show the deputy's patrol vehicle hit the motorcycle twice during a crash that officials attributed, in part, to the rider's sharp braking.

Robert Lee Clark Jr., 30, of Goose Creek lost control after colliding with the deputy's SUV and hit another car. He died at the scene. He was not wearing a helmet, the Post and Courier reports.

In a report, the deputy said he was looking out for speeding motorists on College Park Road when he noticed the motorcycle going 66 mph in a 45-mph zone.

"Speeds reached ... 111 mph at times with the motorcyclist slamming on the brakes and then speeding away several times," Chief Deputy Mike Cochran added in the sheriff's statement.