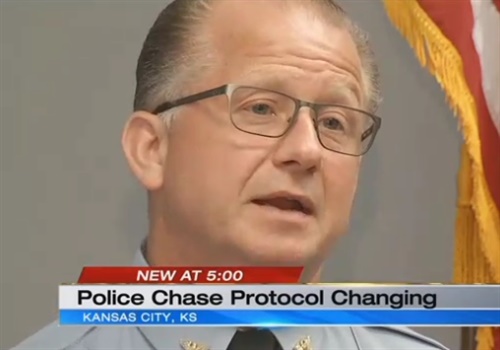 VIDEO: KS PD Will Now Chase Everyone Who Flees With Probable Cause

The Kansas City (KS) Police Department announced a new crime initiative Tuesday aimed at decreasing crimes the police chief says are skyrocketing. Now instead of only chasing suspects that had already committed a serious felony, they will chase everyone who flees police as long as they have probable cause, reports KCTV.

In 2014, after two innocent people were killed in separate crashes, Kansas City, KS, police chose not to chase criminals, and now they are saying that could have led to the problem. Police Chief Terry Zeigler says it's time for a change.

The new initiative, Project Act: Addressing Crime Together, will specifically help a historically crime-ridden area of KCK. Through the initiative, Zeigler looked at years of data to find where the most homicides and drive-by shooting occurred in KCK.

Now, officers won't just be chasing but also stepping up patrols and working with community leaders.