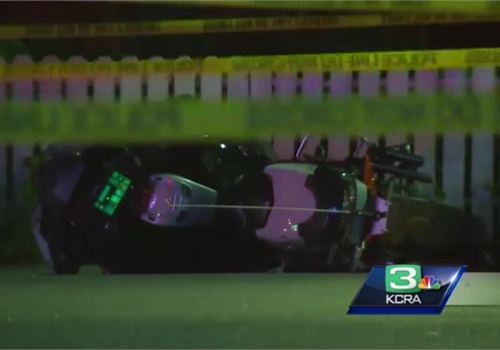 A man suspected of being the subject of a pursuit that resulted in the death of a California Highway Patrol motorcycle officer Wednesday night has been arrested, reports the Sacramento Bee.

The CHP announced Thursday night that Alberto Morales Quiroz, 26, was taken into custody at 11:45 a.m. Thursday in connection with the death of Officer Lucas Chellew.

Investigators believe that Quiroz was the suspect riding an allegedly stolen motorcycle that the officer was chasing when he was involved in a collision that resulted in Chellew being fatally injured, according to a CHP news release.

Quiroz was booked into Sacramento County Main Jail at 7 p.m. Thursday on suspicion of evading a police officer and driving in a reckless manner, vehicle theft, possession of a stolen vehicle, and resisting arrest, jail records show. Bail was set at $60,000 for those charges, most of which are felonies.

Officer Chellew, 31, was an eight-year veteran of the CHP, a husband, and father of two children. His father and sister were also CHP officers.