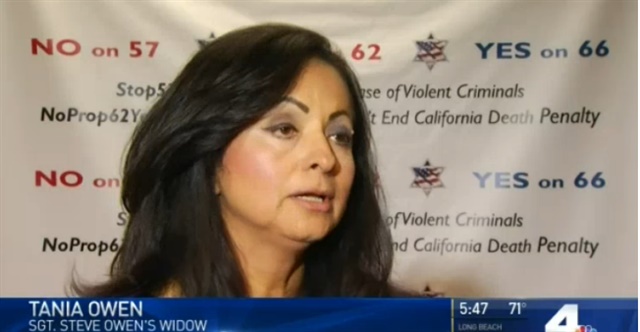 Family members of two law enforcement officers slain in recent weeks have come out against Proposition 57, accusing Gov. Jerry Brown of attempting to deceive voters about the measure that would enable some inmates to be paroled sooner.

"Governor Brown, I'm calling you out on this," said Tania Owen, widow of Los Angeles Sheriff's Sgt. Steve Owen, who was shot to death on Oct. 5 while pursuing a burglary suspect in Lancaster. The accused killer, Trevon Lovell, was on parole.

Proposition 57 is entitled the "Public Safety and Rehabilitation Act of 2016," but opponents contend releasing some inmates sooner would affect public safety negatively.

Tania Owen, herself a sheriff's detective, called Brown a "deceiver."

Other members of the Owen family, and David Kling, the father of slain Palm Springs Officer Lesley Zerebny and himself retired law enforcement, gathered Tuesday in the San Dimas office of the Professional Peace Officers Association to speak at a news conference organized by the No on 57 campaign, which is largely driven by members of law enforcement and prosecutors.

In a chilling moment, David Owen revealed that before his brother's death, Sgt. Owen had texted him a message about Prop 57, KNBC TV reports.

"'And before I forget, tell all your friends:  No on Prop 57. If that passes, crime is going to skyrocket.  Bad'-- with three exclamation points," David Owen read. "Don't let my brother die in vain."