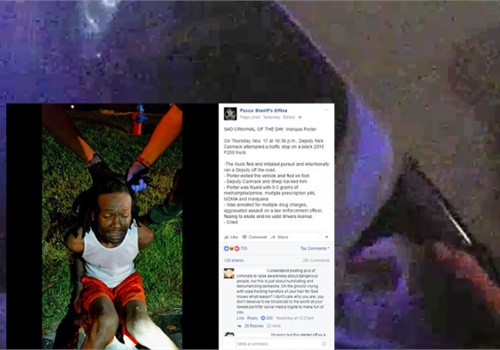 Marquis Porter was arrested on Friday morning on charges that he fled from Pasco County deputies during a traffic stop, intentionally ran a deputy off the road, and was holding 9.5 grams of meth, the office said, the Tampa Bay Times reported Friday.

"We want to take a moment to share with you something that may get overlooked but is something that our members have every single day for those we interact with: compassion," the post read. "This same compassion was given by our deputies with this same suspect."

The original social media post — which was titled "SAD CRIMINAL OF THE DAY" and featured Porter, 21, handcuffed and crying while deputies held his head up by his hair — generated reactions across the spectrum. Some cheered the Sheriff's Office for catching a man deputies said was carrying drugs and tried to run them off the road.

"I think some of the accusations of us, of our agency, don't stand up to how this man was treated," said Sheriff's Office spokesman Kevin Doll on Monday. "He asked for water, he asked for a blanket, and we gave it to him."