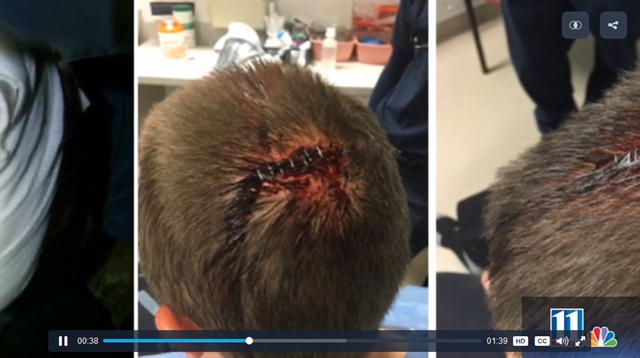 VIDEO: Georgia Officer Arrests Burglary Suspect After Being Beaten with His Own Baton

Officer Jordan Wenslow of the Gwinnett County (GA) Police Department was beaten, bleeding, and dizzy when he arrested a fleeing burglary suspect Wednesday.

A Gwinnett County Police spokesperson said Officer Wenslow was on patrol in Dacula around 2 a.m., when he saw a man walking down Winder Highway carrying a duffel bag. There had been a series of burglaries in the area, and Officer Wenslow tried to make contact with the man.

Police said when the man saw the patrol car, he started running. Officer Wenslow chased and tried to arrest him. Police said the suspect, David Gill, 25, fought back. During the altercation, Officer Wenslow's asp baton "became dislodged from its scabbard", according to police

Gill allegedly picked up the baton and struck Officer Wenslow in the face several times. The officer was bleeding profusely and started getting dizzy when he drew his gun and told Gill to get down on the ground. Police say Gill dropped the baton and surrendered.

Officer Wenslow received ten staples to close the wound in his head. He's believed to have suffered a concussion, WXIA TV reports.