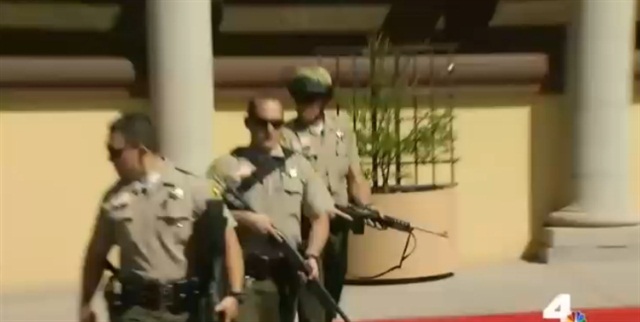 A gunman fatally shot by police while holding his estranged girlfriend hostage on the side of a road in Redlands, CA, was identified Thursday night as a 29-year-old man from Downey.

Andrew Mike was killed by police in a volley of gunfire, bringing the more than two-hour standoff to a dramatic end.

The incident began when the man was fighting with his ex-girlfriend at an Office Depot in the area of Sixth Street and East High Avenue, Redlands Police Chief Mark Garcia said. The man pulled out a gun and fired a round, striking someone unrelated to the argument in the hand.

The gunman then fled with his ex-girlfriend to a nearby street, where he took cover behind the woman as they sat on the ground. Officers backed by an armored vehicle surrounded the couple with guns drawn.

About two hours later, gunshots suddenly erupted and the man keeled over dead. Officers rushed in and dragged the woman away to safety. She was soon taken to a hospital, where she was in stable condition being treated for serious gunshot wounds, Garcia said.

Moments later, police confirmed that the man was killed in the shooting, KNBC TV reports.

It is not known if the hostage was shot by the gunman or by police.