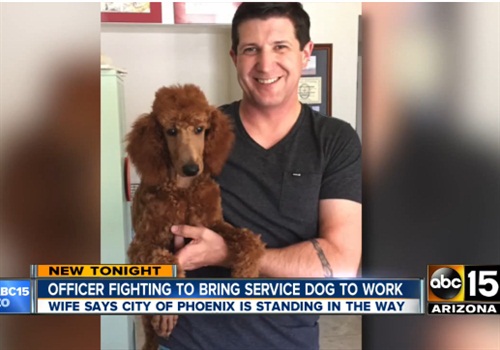 Phoenix Officer Scott Sefranka is documenting his struggle with the City of Phoenix to bring his service dog to work after he was injured in the line of duty, reports KNXV-TV.

Sefranka was shot on New Year's Eve in 2013 by an armed robbery suspect. Sefranka isn't just working to physically regain the strength he lost and recover from his extensive injuries, he's also been working mentally to overcome the flashbacks.

His therapist recommended a PTSD service dog to help with his Post-Traumatic Stress Disorder. So he got Bigby. His wife Christie says the dog has transformed him. But Christie claims the city doesn't want her husband to bring his service dog to work. Sefranka is currently assigned to the Missing Persons department.

Right now there is no city policy in place dealing with service dogs. A city spokesperson says it is handled on a case by case basis. Currently, there are no other City of Phoenix employees that require a service dog.