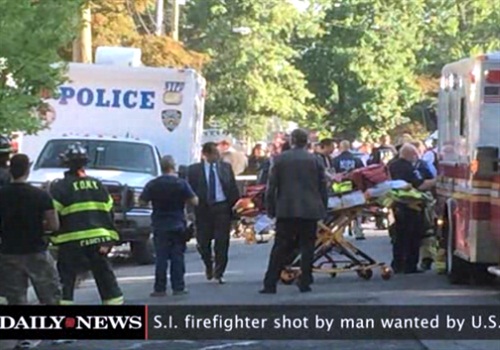 An ex-con, hours after promising a fight to the death, died in a hail of police bullets to end a six-hour Friday standoff at his Staten Island, N.Y., home, sources said, reports the New York Daily News.

A barrage of gunfire erupted around noon at the residence where suspect Garland Tyree had set an early morning fire — and then twice shot a New York Fire Department lieutenant after a failed arrest attempt.

Tyree, a gang member with a 20-year criminal history, had been barricaded alone inside the home since federal marshals arrived to arrest him before daybreak, officials said. His history includes 18 arrests dating back two decades, three federal convictions, and a longtime affiliation with the violent Bloods street gang, authorities said Friday.

The 38-year-old career criminal made a chilling Facebook post indicating that he would not surrender. "Today I die," he declared just minutes after he opened fire on firefighters, officers, and federal law enforcers.