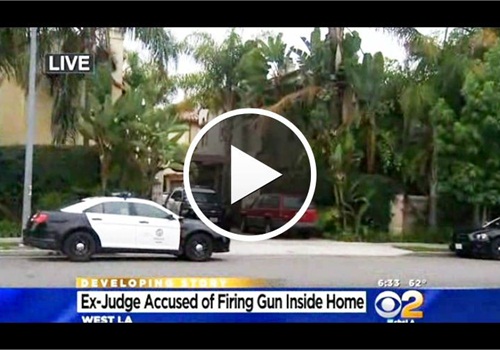 In Los Angeles' legal community, James A. Bascue was a towering and admired figure. As a top prosecutor, he became a national expert on gang prosecutions. Appointed to the bench, he rose to presiding judge of Los Angeles Superior Court. But shortly after 2 a.m. Thursday, Bascue found himself on the other side of the law.

Los Angeles police said they arrived at Bascue's West L.A. townhouse to find him inside holding two guns. Authorities said he fired on officers, prompting a standoff with a SWAT team that ended with the arrest of the 75-year-old retired judge, reports the Los Angeles Times.

About 11:45 p.m. Wednesday, Bascue called police reporting that he was being held hostage inside his home in the 1900 block of South Barrington Avenue, police said.

When officers arrived, authorities said, they peered into a window and saw him sitting in a living room chair with two guns in his lap. He loaded the guns' magazines and pointed a gun at his head, police said.

Officers pleaded with him to drop the weapons.

He fired two shots: one inside his house, another toward the officers at the window, but missed.

A neighbor eventually persuaded him to give up.