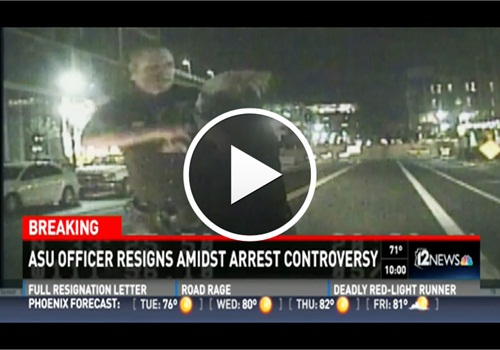 An Arizona State University police officer who has been fighting to keep his job resigned instead Monday after an independent investigation found fault with his arrest last summer of a university professor.

The 25-year-old officer had been on leave since July after a video of his arrest of ASU assistant professor Ersula Ore went viral and drew national attention. The university sent the officer a letter in January, notifying him of its intent to terminate him. The officer appealed the decision, the Arizona Republic reports.

"The lack of support, cooperation, and downright bias, coupled with an agenda to ruin my career, has become unbearable and I will not subject my family to this any longer," the officer said Monday in a resignation letter sent to ASU.

ASU issued this statement Monday: "This review was never about a single incident or a single issue. Law enforcement officers in any jurisdiction are given the tremendous responsibility of helping to keep the community safe. They also are expected to exercise good judgment in the performance of their duties and, when given direction after missteps, are expected to follow that guidance."