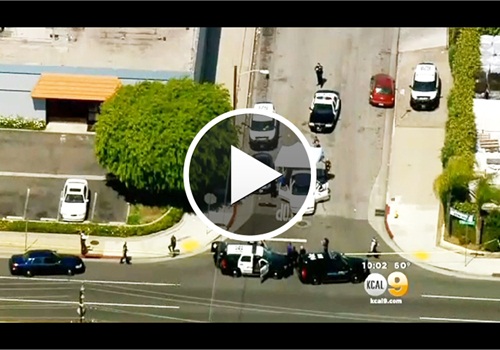 A Southern California woman in fear for her life was shot to death in front of a police officer, who fired back, killing the shooter, authorities said Wednesday.

Authorities were sent at 12:42 p.m. to an intersection in Hawthorne to investigate the shooting, according to Lt. Amy Yoshita.

According to a preliminary investigation, a Hawthorne police officer was on patrol when a woman driving a car pulled up and said she was being followed. The officer told the driver to pull up in front of him and he would investigate, sheriff’s officials said.

Investigators say a white Cadillac then pulled up next to the officer and the woman.

“The right front passenger of the suspect vehicle got out and began firing at the driver and passenger in front of the police officer. The police officer immediately got out. And an officer-involved shooting occurred,” Los Angeles County sheriff’s Lt. Dave Coleman told KCBS TV.