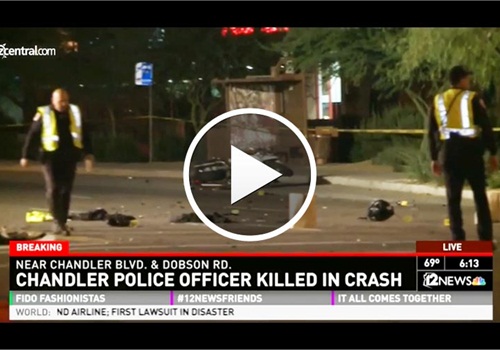 A Chandler, Ariz., motor officer was killed on duty in a wreck Friday morning, marking the second time in a week that the agency has lost an officer in a motorcycle collision.

Police said Officer David Payne, 37, was sitting on his police motorcycle at a red light at about 12:40 a.m. Friday when a car rear-ended him at the intersection of Chandler Boulevard and Pennington Drive.

Payne was taken to a hospital where he died less than an hour later, AZCentral.com reports.

Police arrested Tempe resident Brian Yazzie, 31, on suspicion of manslaughter and hit-and-run for his role in the collision, said Sgt. Joe Favazzo, a Chandler police spokesman.