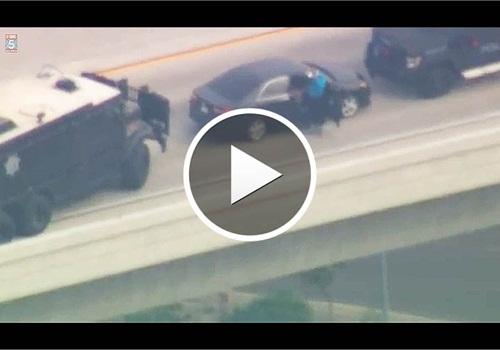 The situation wrapped up peacefully at about 9:45 a.m. when Daniel Perez, 43, emerged from a black sedan carrying a child and a cellphone on a transition road between the 52 and 67 freeways in San Diego County.

The man let the child go and was tackled and arrested. Three other children also believed to be Perez’s were also rescued.

An Amber Alert had been issued after the body of a woman was discovered in the trunk of one of the family's cars Wednesday night, according to police.

The family of six, including Daniel Perez, 43, his wife, Erica Perez, 39, and their four children were said to have been missing since Friday, police told the Los Angeles Times.