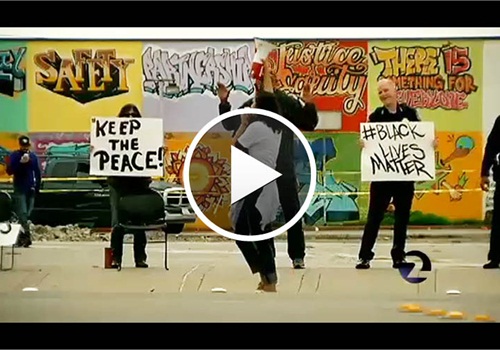 Amid the nationwide tumult over recent instances of police officers using deadly force against suspects, Northern California cities like Berkeley and Oakland have been rived by violent demonstrations.

But a different kind of protest popped up in the Bay Area city of Richmond on Tuesday, and at the vanguard of the gathering calling for a reduction in police violence in communities of color was an unlikely participant: Richmond's police chief.

Police Chief Chris Magnus, who has drawn acclaim for his community-policing approach and helping drive down both crime and use of force by his officers in recent years, was front and center, facing the street while holding a white sign that said "#blacklivesmatter." The photo quickly went viral on social media, the image of the uniformed chief with the popular hashtag a stark contrast to the anti-police sentiment many associate with it.

"I spoke with my command staff, and we agreed it would be nice to convey our commitment to peaceful protest and that black and brown lives do matter," Magnus told the Contra Costa Times after the protest. "And to help bridge the gap that we understand sometimes exists between police and community around certain issues."