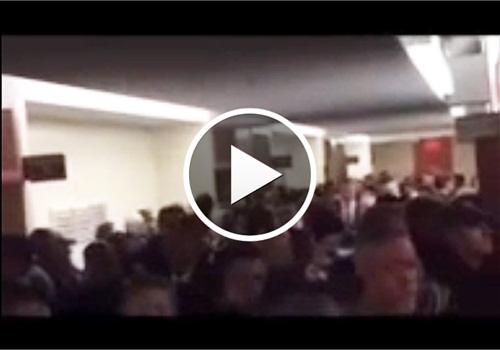 Mayor Bill de Blasio got a chilly reception from NYPD officers at Woodhull Hospital Saturday after two officers were shot to death in Brooklyn.

In video posted on YouTube, police officers can be seen silent, with their backs turned to the mayor as he walks by.

Following the shooting of officers Rafael Ramos and Wenjian Liu in Bedford-Stuyvesant Saturday afternoon, police union officials blasted the mayor, saying the blood of the two officers were on his hands, CBS News reports.

Patrolmen’s Benevolent Association President Patrick Lynch and de Blasio have been locked in a public battle over treatment of officers following the grand jury’s decision not to indict an officer in the deathof Eric Garner.