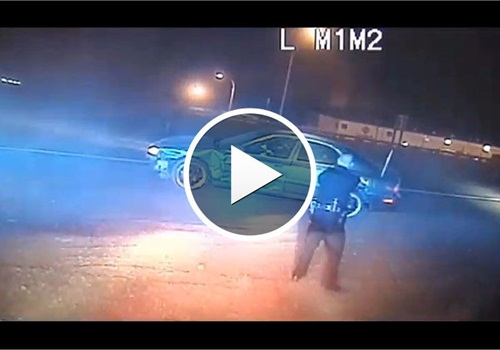 In April, Yakima (Wash.) Police pursued a 24-year-old man as he violently rammed into police cars on an interstate onramp. The chase ended with the man's death. Local TV station KNDO received the department's video of the incident and broadcast the footage.

The incident began when a Yakima police officer pulled over 24-year-old Rolando Villanueva for driving erratically. The suspect pulled into a parking lot, but then sped away. Officers took chase.

The suspect repeatedly ran into police cruisers as he attempted to evade officers. Villanueva also ran a red light, narrowly avoiding a crash with another vehicle. He continued to drive away even after refusing police orders and being shot twice, finally hitting a center median and dying from his injuries.

The Yakima Prosecutor's Office is still reviewing the evidence to determine if the shooting was justified. Officer Ira Cavin has since returned to the job.