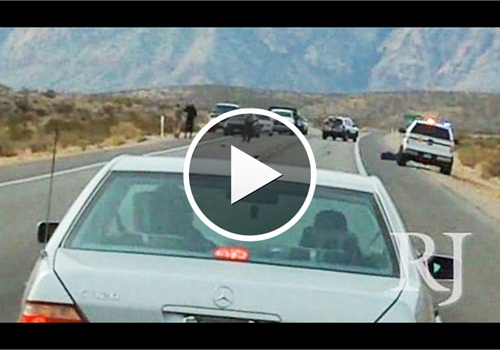 Two men who observed a police stop on Friday near Las Vegas captured a fatal officer-involved shooting on video.

The video shows a confrontation between Bureau of Land Management rangers, a Nevada Highway Patrol trooper, and a man who had reportedly been attempting to flag down motorcyclists near Red Rock Canyon National Conservation Area.

During the incident, the rangers held the man, D’Andre Berghardt, 20, at gunpoint but the man reportedly did not comply with their commands, which led to him being pepper sprayed by the rangers.

The confrontation escalated and a Nevada Highway Patrol trooper arrived on the scene.

At some point Berghardt reportedly made a dash for the trooper’s SUV and, according to the rangers, tried to remove the trooper’s AR-15 from its locked gun rack.

One of the rangers fired eight or nine shots at Berghardt while the man was inside the trooper’s SUV. He died at the scene.

The Las Vegas Review-Journal reports that the NHP has not released an official statement on the incident. NHP spokesman Loy Hixson told the paper on Friday the officers “felt their lives were in danger” at the point the ranger opened fire.