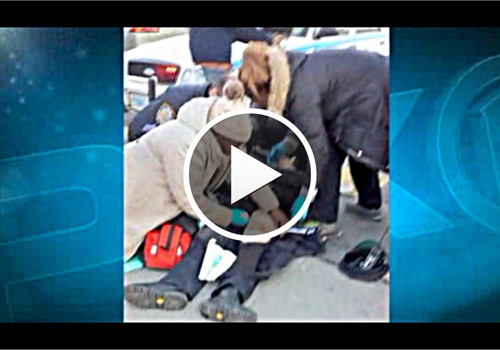 An NYPD rookie — just two months out of the Police Academy — was shot in both legs Wednesday when he and his partner pulled a gun-toting fare-beater from a city bus, the New York Post reports.

Rookie Officer James Li, 26, and his partner Randy Chow were on routine patrol in Crown Heights, Brooklyn, when they spotted two men entering the backdoor of a B46 bus without paying. The cops boarded the bus, which was southbound on Utica Ave, about 5 p.m. and removed both suspects.

One of the men, identified by cops as Rashaun Robinson, took off running. Robinson, 28, allegedly whirled toward the officers, whipped out a .45-caliber Smith & Wesson handgun and from 10 feet away squeezed off three shots.

Robinson, who has six city arrests on his record and a drug warrant from Pennsylvania, was busted in a nearby building without more shots being fired.
Cops found the weapon used in the shootout on him, and Chow identified the perp as the gunman who shot his partner.

Robinson, 28, was charged Thursday with attempted murder of a police officer, weapons possession, assault, criminal use of a firearm and reckless endangerment in the wild Brooklyn street shootout, police told the newspaper.