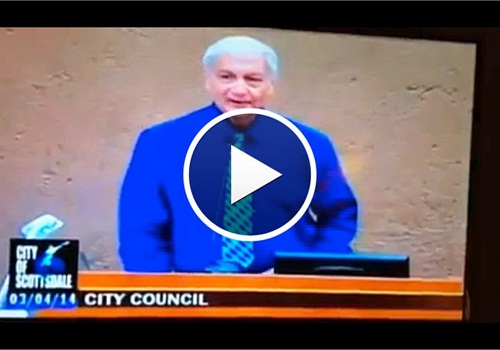 Last night Mayor Jim Lane of Scottsdale, Ariz.—a Phoenix suburb—refused a request for a moment of silence for a Phoenix detective killed in the line of duty during a Monday afternoon shootout.

The incident took place during last night’s Scottsdale City Council meeting when a public speaker, whose own father was a cop murdered in the line of duty, asked for a moment of silence to honor Det. John Hobbs. Hobbs was killed and his partner critically wounded during an exchange of fire with an ex-con wanted for a recent murder.

Hobbs, a 21-year veteran of the Phoenix Police Department, was 43 and he left behind three young children and a wife. The story made national headlines because it seemed more like a scene from a movie, with chaotic gunfire exchanged in the middle of the day near a busy intersection in a major U.S. city, Judicial Watch reports. The Arizona Republic followed up with a profile of the murdered detective who, mortally wounded and his partner down, managed to return fire at the fugitive. The fugitive was killed in the shootout.

Judicial Watch contacted Mayor Lane about the incident and he explained the difference between members of the public speaking at city council meetings and requesting things such as a moment of silence for a fallen officer. "We can’t allow them to take control of the meeting," the mayor told JW. The public speaker could have just stood there silently during his allotted time, but Lane claims instead "he was directing the audience."

The moment of silence for Det. Hobbs was conducted at the meeting.