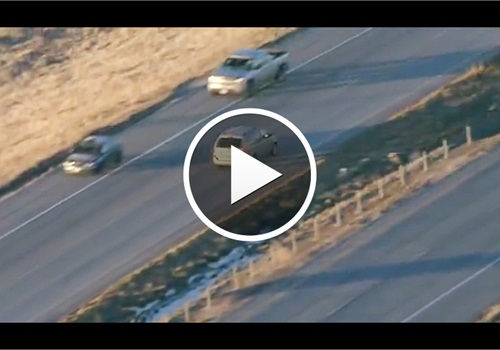 A Colorado State Trooper was seriously injured Wednesday morning during a wild pursuit through the Denver metro area that started after a red SUV with a child inside was stolen.

The 4-year-old boy was recovered by officers from the Commerce City Police Department after the suspect abandoned the SUV and carjacked a minivan.

Colorado State Trooper Bellamann Hee was hit by the carjacked minivan and seriously injured during the pursuit. Trooper Hee underwent surgery and is expected to fully recover.

ABC 7 reports that its helicopter clocked the minivan at approximately 117mph during the pursuit.

The suspect identified as Ryan Stone, 28, reportedly struck Trooper Hee on E-470 between Chambers and Peoria at 8:03 a.m. as he was attempting to put down stop sticks.

"After he throws the (stop) sticks, the suspect veered his direction. The trooper ran out of the way, attempted to get out of the way by jumping the guard rail and subsequently was hit and kind of pinned under the guard rail by the vehicle. He has been transported from the scene to Littleton Hospital. He is expected to be OK," CSP Trooper Nate Reid told ABC  7.

The entire pursuit lasted more than an hour and involved three stolen vehicles. Stone was taken into custody, police say, shortly after crashing a carjacked BMW.