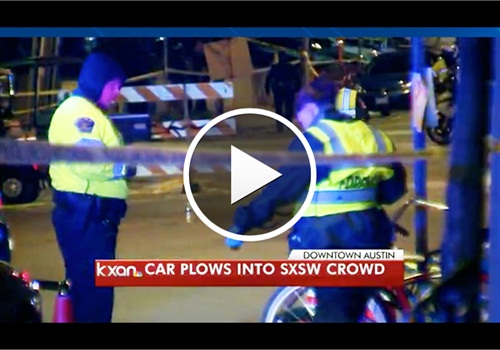 Two were killed and 23 injured Wednesday night after a DWI suspect reportedly fled police and plowed into a crowd of people in downtown Austin, Texas, waiting outside of a club for a South by Southwest festival concert. The driver has been charged with two counts of capital murder.

Authorities say the driver almost struck an officer with the car while trying to get away. Police say the suspect then drove the wrong way on Ninth Street, plowed through a barricade on Red River Street, and hit people in the festival crowd.

The suspect then drove through 10th and 11th streets before crashing into a van. Police say the driver then jumped out of the car and ran but officers were able to TASER and arrest the suspect.

KXAN TV reports that a man and woman on a moped were pronounced dead at the scene and 23 people were transported to the hospital by EMS.