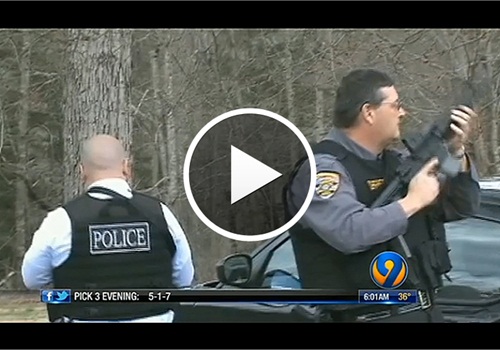 A Burke County, N.C., man killed a U.S. Forest Service officer and the officer’s K-9 partner Wednesday during a rampage that began with the murders of the man’s father and step-mother, authorities say. The suspect was killed by officers.

At around 9:30 a.m. Burke County Sheriff’s deputies were called to the home of Levi and Rhonda Whisnant for a welfare check. Inside they found the couple’s bodies.

The discovery triggered a manhunt for the couple’s son Troy Whisnant, 38.

During that search, the suspect reportedly ambushed and killed U.S. Forest Service officer Jason Crisp and his K-9 Maros. Crisp and his dog had been assisting in the search.

Officers and deputies from around the area heard the "officer down" call and came to search for the suspect. Around 5 p.m. the suspect was located and shots were fired. The suspect was shot and killed by officers.

WSOC TV reports Troy Whisnant had been convicted of another Burke County killing in 1996. In that case, he pleaded guilty to manslaughter, was sentenced to three years in prison, but only served one.

Jason Crisp was a dedicated officer who served 10 years with the Forest Service.

The FBI and the State Bureau of Investigation are investigating both shootings.