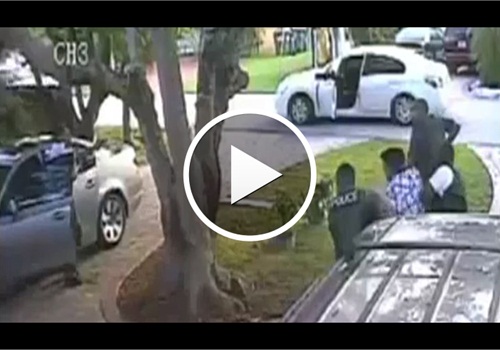 Suspects involved in a drug trafficking operation opened fire on investigating Miami-Dade Police detectives in a deadly gunfight captured by the video surveillance cameras of a marijuana grow house.

The dramatic footage, which was played Thursday at a court hearing, shows the rapidly unfolding gunfight at the west Miami home. Plainclothes detectives had visited the home on July 31 for a "knock and talk" during their investigation.

After arriving, they began to question Luis Estevanell, 60. Estevanell's cohort, Gerardo Delgado, emerges from a parked BMW and opened fire at the officers while attempting to take cover behind a tree.

The officers returned fire striking Delgado several times as the suspect continued firing. Three rounds from Delgado struck John Saavedra, who can be seen falling outside the screen.

Estevanell has been charged with possession of cocaine, trafficking in marijuana, and second-degree felony murder. In Florida, anyone who commits a felony in which a death occurs can be held responsible for murder, reports the Miami Herald.