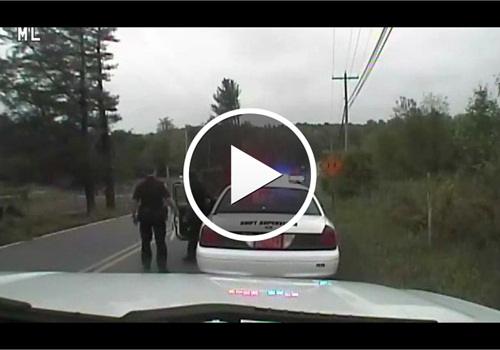 A high-speed vehicle pursuit through rural Burke County, N.C., earlier this month ended with a suspect being taken into custody on the hood of the lead pursuing cruiser.

The pursuit began after Morganton Police Department officers responded to a call about a suspicious car in the parking lot of the Christian Outreach Center on May 2.

Officers recognized the vehicle as being wanted from an earlier crime and initiated a traffic stop of the green sedan. The suspect's vehicle pulled over just long enough for officers to exit two units. An engine revving can be heard on patrol-car video, as the suspect takes off on Highway 70.

The suspects blow stop signs and reach speeds exceeding 80 mph before pulling to a stop near a market. Donelle Nicholas Cuthbertson jumps out of the vehicle's passenger-side door. A plainclothes officer can be seen taking Cuthbertson into custody.

Vehicles from other law enforcement agencies blocked off intersections to keep the road clear until the suspect could be apprehended, reports the Hickory Record.