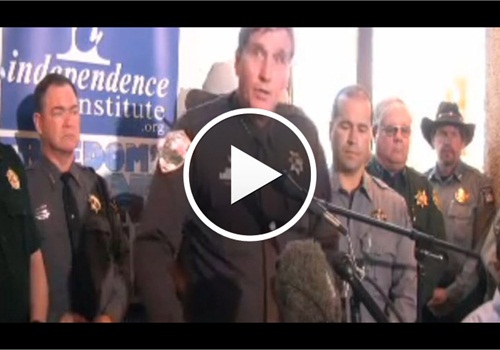 Nearly nine of 10 Colorado sheriffs have signed onto a lawsuit seeking to overturn a trio of new gun-control laws signed into law in March.

Of the state's 64 sheriffs, 55 support the lawsuit announced Friday that's spearheaded by Weld County Sheriff John Cooke. At a press conference, Sheriff Cooke blasted the laws as unconstitutional and ineffectual.

"For me, this lawsuit is about two things—first, upholding the constitution, which I took an oath to defend just like the other 53 sheriffs. But it's also about public safety. These bills do absolutely nothing to make Colorado a safer place to live, to work, to play or to raise a family."

On the eve of the passage of the laws, Sheriff Cooke announced he and other sheriffs wouldn't enforce the laws, which he deemed unconstitutional gun control. Oath Keepers Colorado released a statement Friday lauding the lawsuit and saying the group is "pleased by this kind of patriotism displayed by county sheriffs."

On March 20, Gov. John Hickenlooper signed three laws that would limit ammunition magazines to 15 rounds, require universal background checks for gun sales and transfers, and require customers to pay for the cost of background checks.

The lawsuit was filed on behalf of the sheriffs by the Independence Institute. Read the full complaint here.