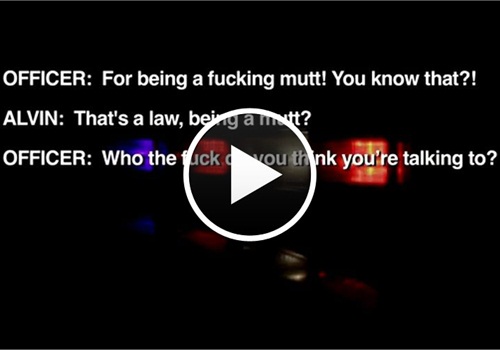 An NYPD officer told a 16-year-old student he stopped him because he was "a f**king mutt" in audio captured by the teen and included in a report from The Nation criticizing the agency's stop-and-frisk policy.

The officer also threatend the teen, identified as Alvin, with repeated violence, including saying he would "break your f**king arm off right now." The profanity laced clip also includes the officers telling Alvin the stopped him because he kept looking back at them. The officers also threaten Alvin with arrest.

The report questions the NYPD's use of stop-and-frisks and comes as the City Council begins considering whether to establish an Inspector General to oversee the department. Mayor Bloomberg opposes the move, saying it would "politicize control of the police department."

The Nation video, made by Ross Tuttle, also includes interviews with anonymous NYPD veterans who say the department promotes unnecessary stop-and-frisks on a routine basis.