Drug trafficking. Home invasion robbery. Bank robbery. Calvin Wallace had been arrested for these crimes and others. And yet he had somehow escaped serious convictions. Fate had seemingly been on Wallace's side. At least, it would have appeared to have been that way leading up to June 12, 2012. That was the day that a decision to rob a bank in nearby Delray Beach of $2,500 would go very badly for the 52-year-old career criminal.

Late that afternoon, Boynton Beach police officer Eric Reynolds copied a crime bulletin describing a vehicle that had been used in an armed robbery of a Chase Bank in the neighboring city. The car was described as a red Crown Victoria with a white top last seen heading toward Federal Highway, which separates Boynton Beach from the coast.

Reynolds knew the various escape routes available to the suspect would pass the intersection of Woolbright Road and Federal Island. So he set up a vigil there. And 10 minutes later his efforts were rewarded with the sight of a red Lincoln Town Car with a white top entering Boynton Beach across a bridge from the Intercoastal Highway. It wasn't a Crown Vic, but it was close enough for government work. Moreover, it made sense that this was the car. The time lapse relative to the bank's location and Boynton Beach was pretty much dead-on.

Advising his dispatch that he'd observed what might be the suspect's vehicle, Reynolds hung a U-turn to get a closer look at the car and its driver.

The Lincoln made a right turn at Federal Highway and proceeded northbound. Reynolds pulled in behind it. The suspect spotted the patrol car and gunned his engine. Reynolds accelerated to follow.

As the distance between the two vehicles narrowed, the suspect eased up on the gas. Reynolds ran the license plate and took notice of the car's handicap tags. Since the vehicle had slowed from its initial acceleration, he started to wonder if the driver wasn’t a fleeing bank robber and just an elderly citizen from a nearby community making his way home after a day at the beach.

Reynolds waited for a return on the Lincoln, and it suddenly veered toward the curb and stopped. Stopping his cruiser some 30 feet behind the Lincoln, Reynolds turned on his emergency lights for safety and sat. Since he hadn't initiated a formal stop of the Lincoln, his suspicion that the driver was simply an elderly gentleman who'd been speeding grew. Still, he was in no hurry to jump out of the car to find out. Backup wasn't on scene, and Reynolds had long ago learned not to rush things.

Several long seconds passed. Then, just as abruptly as it had stopped, the car took off. And once again, Reynolds was chasing after it.

Boynton Beach police officer Chris Munro had just finished gassing up his patrol car to start his shift when the broadcast went out. Munro had since decided to monitor the scene from the opposite lanes of traffic. At the sight of the Lincoln flying past him, Munro fell in behind Reynolds. As the second unit in pursuit of the unknown driver, he also assumed responsibility for radio communication.

Reynolds and Munro were beginning to believe that their quarry was indeed the bank robbery suspect Wallace.

With the two officers in pursuit, the Lincoln went charging down Ocean Avenue, one of the main thoroughfares in Boynton Beach and at rush hour one of the most congested. Wallace's bid to avert a collision with oncoming traffic caused his car to violently fishtail. He slammed on the brakes and pulled to the center median.

The sea of traffic wasn't going anywhere soon; it was gridlocked. Wallace knew that he'd be in the same boat if he committed himself to it. Seeing a vacant parking lot, Wallace pulled off the roadway and circled the parking lot before pulling out and heading northbound onto Federal Highway. He sped off, cranking a hard left onto Boynton Beach Boulevard, then clipping another vehicle as he hung a right onto Railroad Avenue.

Reynolds followed. He stayed close enough to the Lincoln to keep it in sight, but not so close as to compromise his safety. Reynolds tried to anticipate Wallace's next move. The bank robbery suspect's decision to migrate from rush-hour traffic to an industrial neighborhood was unlikely to have been happenstance. If such was the case, it might well mean that Wallace was preparing to stop the Lincoln and run away on foot.

But for the moment, Wallace’s foot was making heavy work of the Lincoln's gas pedal and the pursuit sped down the narrow two-lane road at 60 mph.

Suddenly, Wallace cranked a sharp left turn onto Northeast Ninth, cutting the corner sharply and finding himself face to face with an oncoming Toyota Camry. The two cars collided head-on, the rear end of Wallace's Lincoln flying into the air before crashing back to the asphalt.

The sudden termination of the pursuit found Officers Reynolds and Munro stopped side by side about 10 yards from the Lincoln. Munro jumped from his unit, taking cover behind his passenger door with the engine block of his patrol car between himself and the suspect.

With only his driver's door to use as cover, Reynolds watched as the suspect struggled to force his door open. Reynolds braced for the man to make a break for it. Instead, Wallace’s arm extended out of the car window. 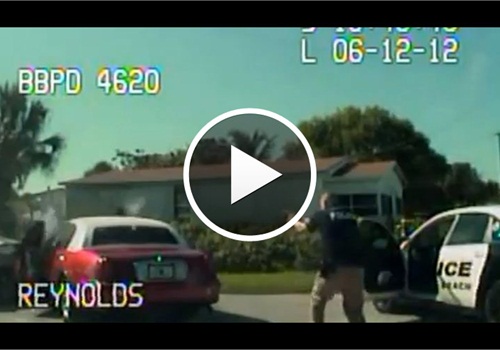 Reynolds saw the muzzle flashes from Wallace's .45 and darted to his left, sprinting across the blacktop and onto a gravel road. Bullets ricocheted off the ground at his feet. He ran for the cover of a telephone pole and returned fire, laying down six rounds of suppression fire. Munro opened fire, too. Wallace shot back.

The officers and Wallace were exchanging rapid fire. Reynolds wondered when he would run out of bullets, then his slide locked back indicating the end of his magazine. He dumped the first magazine, reloaded then resumed firing, as Munro made his way to cover behind the telephone pole. The suspect stopped firing, but continued to move about in his car.

"Let me see your hands! Get out of the car! Drop the gun! You’re gonna die!"

The officers’ commands were punctuated by still more gunfire being directed toward them from the interior of the Lincoln. Abreast of one another, the officers returned fire, dumping more rounds into the passenger compartment area.

There was a brief lull in the firefight. Two boots appeared at the edge of the driver's side door. Both officers wondered if the suspect was down and out.

Munro and Reynolds cautiously closed the distance to get a visual on the suspect. They saw that Wallace was in the process of trying to desperately clear a jam from his gun. He was determined to make one last ditch effort to escape.

Both officers opened fire. Wallace collapsed, his gun falling from his hand.

The echoes of the gunfire were suddenly eclipsed by sirens.

Reynolds felt the protective grip of a hand on his back.

"We'll take it from here," a voice said.

Reynolds backed off in deference to his fellow officer's words.

The arriving officers watched Wallace to make sure he was no longer a threat. Then they approached the Lincoln. They pried open the driver's door, pulled Wallace out of the car, and attempted CPR.

By now it had dawned on Reynolds that Wallace wasn't the only one who didn't come out of the shooting unscathed. He felt a sting in his left foot, and saw two holes in his boot. Minutes later as he lay in the back of an ambulance transporting him to the hospital, Reynolds inquired about the suspect.

The strength with which the EMT's words hit Reynolds surprised him. He realized fully for the first time that he'd been in a shootout and killed a man.

Reynolds felt intense anger at the man who had just tried to kill him and forced him to take a life. His first instinct was to call his wife. He remained calm on the phone for her, a task that became more difficult later at the hospital when he saw her and their six-month old son, Kilian, and realized just how close he’d come to losing them both. Still, he kept his emotions in check and refused to acknowledge the pain racking his foot. His son needed to be back home in bed.

In the days following the shoot-out, forensics determined that of the 32 rounds Officers Munro and Reynolds fired at Wallace, 14 found their mark. Of the 14 hits, four would have proven lethal. Two of these fateful rounds had come from Reynolds' .45-caliber Glock, and two from Munro's .40-caliber Glock.

Knowing that he’d come out alive in his confrontation with Wallace—a career criminal and career bank robber—left Reynolds without any regrets about his actions that day. The man he'd shot wasn't a business owner who was down on his luck and tried to rob a bank or some young kid with a cell phone in his hand who was shot by accident.

Calvin Wallace had been a very bad man. Recognized by his cowboy hat and known as "N.O." in deference to his New Orleans origins, Wallace wasn't going to be missed by his neighbors whom he'd preyed upon.

With the shooting fresh in his memory, Reynolds' injuries were rehabilitated enough for him to be cleared to return to patrol duty. He wondered how he would perform on his first traffic stop or on a routine alarm call. Would he be too aggressive and pull his gun too quickly? These concerns, while understandable, have thankfully proven to have been unwarranted.

While Reynolds does not believe that he has experienced PTSD as a result of the shooting, he acknowledges that the incident has left its mark on him. He feels it every time his heart rate starts to race with each viewing of the dash-cam footage of the incident. He senses it each day that he travels the same stretch of Railroad Avenue to gas up his patrol car. He is astounded at how seemingly prevalent Lincoln Town cars are in the area.

To counter his anxiety, he has talked to other officers who have been involved in shootings, his supervisors, and especially his family and friends outside of law enforcement. He's given talks to an incoming academy class. He’s also taken up swimming to help relieve the stress of the job.

A few days following the incident, Reynolds celebrated his first Father's Day with his young son. Writing in his journal, he reflected on other officers who’d lost their lives in the line of duty, leaving behind wives and children. He now appreciates every moment he is able to share with his family.

Reynolds has received multiple recognitions as a result of heroism in the incident, including Officer of the Month a wound medal, and a combat cross. He has also been nominated for National Police Officer of the year. But for Reynolds, the greatest reward has been his ability to return home to his wife and son.